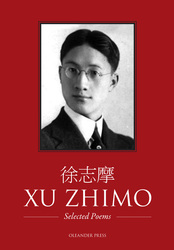 "Outstanding poetry and excellent translations. The poems have a genuine simplicity and force that overlies the genius and layers of the lyrics." ~ Andrew Hamilton

The first English edition of poems by China's foremost modern poet Xu Zhimo, 徐志摩, who studied in Cambridge in the early 20th Century. Whilst here he became enchanted by the Romantic poets such as Keats and Shelley; this form of poetry was to infuse his work from that point on, inspiring him to break through traditional Chinese poetic reserve and constraints and changing the medium forever. His poetry is revered by young and old alike in China, but especially amongst the teenagers and young adults.

This selection contains some of his most famous and well-loved works including By Chance, You Are in His Eyes, For Whom, The Weak Flame of a Star, A Pipa Tune in an Alley at Midnight and the seminal Saying Goodbye to Cambridge Again.

徐志摩, Xu Zhimo was an early 20th-century Chinese poet who sought to promote a modern Chinese poetry that broke with convention and followed Western forms, especially the style of the Romantic and Symbolist poets, with whose work he fell in love while studying at King’s College, Cambridge in 1922.

Verses from his most famous poem, ‘Saying Goodbye to Cambridge Again’, are inscribed on a monument to him behind King’s College Chapel in the city. In light of his immense and ongoing popularity in China, Xu Zhimo can be counted as one of Cambridge’s most influential alumni.

The Oleander Press is proud to have produced this first collection of his poems with contemporary English translations, alongside many of his translations of the work of his favourite poets.

Thomas Hardy - A Week, The Wound, The Division, Her Initials, To The Moon, I Look into My Glass

Katherine Mansfield - The Meeting, The Gulf, Sleeping Together

Christina Rossetti - Song, The Hour and the Ghost

By Chance, Go, It is Not Easy to Survive Nowadays, Spring, Saying Goodbye to Cambridge Again, Cricket, I Don’t Know Which Direction the Wind is Blowing, Insignificance, You Are in His Eyes, Wind in the Pines at Midnight, The Wide Sea, A P'i-pa Tune in an Alley at Midnight

Please Note- Chinese simplified characters are used in this title.