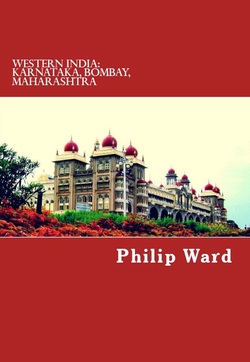 
"If you are fortunate enough to be travelling in India, and specially in the regions that he has already covered, then look no further. This is the one book you really need"

"Ward, in one sweep of his pen, with the strength of his convictions to back him, convinces his readers of the reality and the magic that is India". - The Hindustan Times

Bombay is the pulsating commercial capital of India. its chief port, and point of entry for most visitors by air. Yet already one senses authentic India: that heady diversity of colours, cultures,languages, cuisine and easy tolerance amid bustling bazaars and Victorian buildings. Beyond Bombay, the hinterland of Maharashtra State offers great cave-temples at Ajanta, Aurangabad and Ellora, the pilgrimage towns of Shirdi, Pandharpur and Nasik, Shivaji‘s rock fortresses, and the pleasures of Kolhapur, Ahmadnagar, Pune, Daulatabad’s castle, and cool hill-stations such as Matheran and Mahabaleshwar. Vast Karnataka is worth weeks of exploration, beginning in its pleasant capital Bangalore, spacious Mysore, hilly Mercara, coastal Mangalore, Jog Waterfalls, the immense ruined capital of Vijayanagar, such wondrous Islamic cities as Bijapur, Gulbarga and Bidar, and the splendours of Hoysala dynasty Hindu temples in Somnathpur, Belur and Halebid. Western India focuses on the Jain centre at Sravana Belagola, the magnificence of Aihole and Pattadakal, Tipu Sultan’s capital Srirangapatnam, and the Shiva temple on Elephanta Island. Intended for first-time visitors as well as for experienced travellers keen to understand the background to the vision, Western India provides a sympathetic and thoughtful companion to some of India's most rewarding sights.