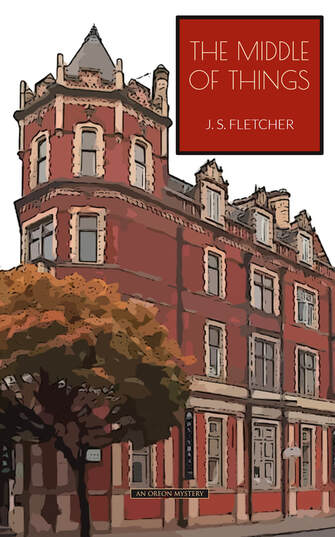 THE MIDDLE OF THINGS by J.S. Fletcher

“So he did it! Now, I should never have thought it! The last person of the whole lot! Clever - very clever! Richard, you’ll get all the books that that man has written!”

So declared detective fiction addict, Miss Bethia Penkridge, to her nephew, just prior to his setting off on his nocturnal stroll.

However, Richard Viner was soon to be caught up in a mystery of his own, as little did he expect that that November night he’d stumble across a man’s dead body in a narrow, dimly-lit passage near to his aunt’s house in Markendale Square, Notting Hill.

Joseph Smith Fletcher (1863-1935), journalist and prolific author, was a superlative master of mystery - over one hundred of them, including bibliomysteries, The Yorkshire Moorland Mystery and Who Killed Alfred Snowe?