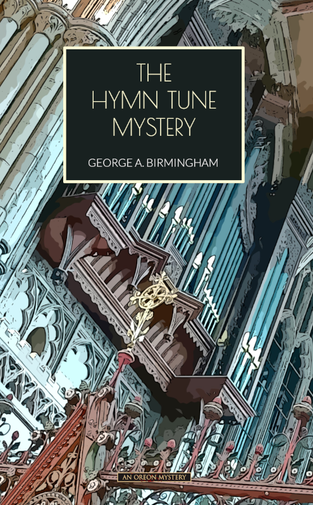 THE HYMN TUNE MYSTERY by George A. Birmingham

"The 'Amen' was sung and then - then nothing more happened. The organ did not begin to play."

Mr. Cresswood, the Carminster Cathedral organist, ought to be above reproach. A little eccentricity may perhaps be tolerated, for, after all, an organist is, or ought to be, a musician, and therefore not quite as sane as an archdeacon. But Cresswood was often inebriated - until the day he's found in the organ loft - quite dead, his skull cracked open.

A dean with scholarly tastes, his daughter, designed by nature to be the head of an Institution, a pompous Archdeacon, a cheerful Irish minor canon and a wonderful assembly of clerics populate this delightfully witty Trollopian treat.

George A. Birmingham was the pseudonym of Canon James Hannay (1865–1950), an Irish clergyman and popular comic novelist. The Hymn Tune Mystery (1930) was his tenth novel.