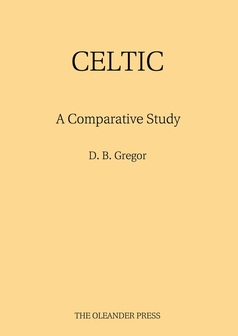 “5* - A marvellous book which is both readable and scholarly”

The core of this work is an examination in depth of six Celtic languages: Irish, Gaelic, Manx (all correctly called Gaelic by their speakers), and Welsh, Cornish and Breton (three cousins of the first group). It is the core because the rest of the work grows out of it; and its consequently central position is intended to mark the peak between flowering and decline.

Encapsulating the core is an account of Celtic origins, and the story of its origins, and the story of the formation, vicissitudes, and dissolution of the six regions where different forms of Celtic are or were spoken. The decline in the number of Celtic speakers is traced in detail; its causes are examined one by one; the struggle for survival is described wherever it is being carried on; and finally the question is asked: “What is meant by revival?”

The requiem for Manx in these pages is included because its loss is doubly painful for having happened in our own day. It is time that languages were regarded as part of the ecological scene, and the end of one of them felt as deeply as the extinction of a species.

It is hoped that this work will leave the reader in that frame of mind: willing to halt the further decline of the Celtic languages.