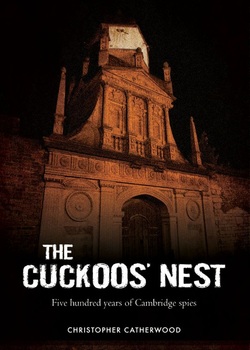 FIVE CENTURIES OF SPIES FROM CAMBRIDGE

What do the dramatist and Shakespeare contemporary Christopher Marlowe, the Elizabethan courtier Sir Francis Walsingham, and Kim Philby, Anthony Blunt, Guy Burgess, Donald Maclean and John Cairncross all have in common?

The answer is that they were all at Cambridge University and all of them were spies...

This brilliant new book is the first to unite such a fascinating group of people, and to explore this extraordinary 500-year continuity provided by their place of education. This direct continuity is something of which Cambridge and its colleges are very aware, and which makes it such a unique place in the annals of espionage, treachery and intrigue. The Cambridge Five are the most famous, recent case. BUT...

The murder of Christopher Marlowe in a tavern brawl is still a mystery, a subject upon which many books have been written, none with conclusive results. But there is one factor upon which they all agree - that his death was directly related to his activities as a spy. Some of those involved, such as Robert Poley, were also Cambridge graduates, and with the ideological war with Spain in the 16th-century having strong parallels with the similar 20th-century struggle of the Cold War (not to mention the fight against fascism in the 1930s that recruited many Cambridge students to Marxism), the level of continuity is therefore remarkable yet again.

The Cuckoos' Nest examines and illustrates the common international themes of the times alongside the domestic political and social atmospheres prevalent and elegantly and fascinatingly weaves them into a spellbinding tale of treachery and treason.

The Cambridge Spies are famous the world over - this book sheds more light on their dubious exploits...