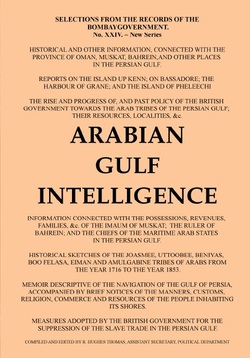 
Arabian Gulf Intelligence is an essential compendium of information concerning the eastern regions of the Arabian Peninsula and islands in the Gulf in the middle of the ninetenth century. If a copy of this rare book ever emerges on the market it commands many hundreds of pounds, so this new edition fills an urgent need in Arabian scholarship.

The British Government of India maintained close surveillance over Eastern Arabia before the Arab states gained independence, and their most important reports by civilian and military personnel are reprinted for the first time in this volume of Selections from the Records of the Bombay Government, with a new frontispiece, new introduction and six maps.

Extensive information is provided on the history, topography, campaigns, and tribal relationships in Muscat and Oman, Bahrain, Kuwait, Qatar and the Emirates, with especially detailed studies of the qawasim, Utuba and Wahhabi. Treaties between Great Britain and Oman, Dubai, Abu Dhabi and Bahrain appear verbatim. Navigation between islands and both shores of the Gulf is fully eluidated. There are notes on Hufhuf, al-Qatif and Buraimi.

Dr Robin Bidwell, who provided the introduction, was Secretary of the Middle East Centre at Cambridge University. He also wrote the introduction for Vincenzo Maurizi's History of Seyd Said, Sultan of Muscat.