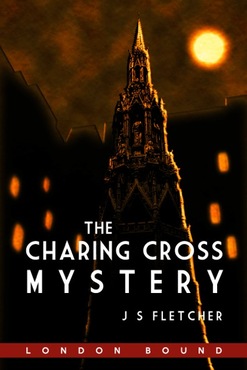 Hetherwick, a young barrister, is heading home late one night when two men enter his train compartment. He listens, intrigued, to their conversation about a beautiful and mysterious – but un-named – woman. When one of the men drops dead, for no apparent reason, as the train pulls into Charing Cross station, Hetherwick is thrown headlong into a disturbing and intriguing mystery that keeps him – and the police – guessing right to the end.

“He stared wildly around him: Hetherwick caught the flash of his eye as it swept the compartment, and never forgot the look of frightened amazement that he saw in it; it was as if the man had been caught, with lightning-like swiftness, face to face with some awful thing ...”

This, the first in our new series, is an opportunity to rediscover a great, early 20th Century detective story from a well-respected author writing at the height of his powers. Set largely in the capital, this thrilling tale pulls the reader deep into 1920s London, carrying them through countless familiar place names and locations in the hunt for the perpetrator of, and reason for, this heinous crime. An amateur sleuth classic!

"A labour of love." - Past Offences

This is a rip-roaring whodunit and I can see why Fletcher is held in high esteem for heading the Golden Age of crime. I look forward to seeing the other titles in the ‘London Bound’ series. - CrimeSquad

LONDON BOUND – A series of classic crime novels, largely from the Golden Age of detective fiction, faithfully transcribed, re-set and reprinted by Oleander under the series name London Bound - owing, unsurprisingly, to their all being set in the nation's capital. The Series Editor, Richard Reynolds, is Chair of CWA Gold Dagger judging panel and crime specialist at the world-famous Heffers Bookshop in Cambridge. Period-style covers for each, whilst honouring the original, have been designed from scratch by Ayshea Carter, designer at the Fitzwilliam Museum. Release schedule – every six weeks.