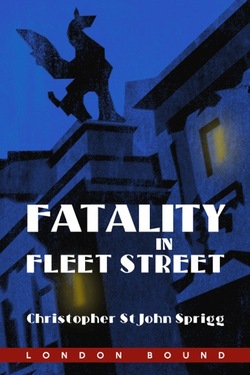 Unheard of for decades, a thrilling new edition of this ultra-rare classic!

From the original cover:
It is the year 1937, and Lord Carpenter, Governing Director of Affiliated Publications, decides, against the wishes of the Premier and the opinion of the entire staff of the Mercury, that it is time to declare war on Russia. So powerful is he that only his death can frustrate this fatal policy. How this dreadful disaster is averted by his murder, and how, after many false clues and suspects, the guilty person is finally arrested, makes this book one of unusual interest to all mystery readers. It is impossible to give in a few words its tremendous scope, with a most ingenious and involved plot carried out by animate characters, drawn with great and psychological insight. An exciting and absorbing book which, once started, it is impossible to put down again before it is finished.

Christopher St. John Sprigg wrote seven detective novels before his death, over 75 years ago at the age of 29, fighting in the Spanish Civil War. Of these, Fatality in Fleet Street is the most sought-after, and one of the rarest Golden Age detective novels. Oleander is delighted to have made this brilliant, complex and entertaining tale of politics, murder, deception and power back into circulation and available to mystery and crime fans around the world.

LONDON BOUND – A series of classic crime novels, largely from the Golden Age of detective fiction, faithfully transcribed, re-set and reprinted by Oleander under the series name London Bound - owing, unsurprisingly, to their all being set in the nation's capital. The Series Editor, Richard Reynolds, is Chair of CWA Gold Dagger judging panel and crime specialist at the world-famous Heffers Bookshop in Cambridge. Period-style covers for each, whilst honouring the original, have been designed from scratch by Ayshea Carter, designer at the Fitzwilliam Museum.